Your Little One's Allergies Often Relapse? It could be because of wrong drinking milk

Your Little One's Allergies Often Relapse? It could be because of wrong drinking milk

Food allergies are something that is quite often experienced by children, especially if there is a history of allergies in the family. If your little one shows symptoms such as itching, swollen lips, and stomach pain after consuming certain foods or drinks, it could be a symptom of an allergy. Milk can be one of the causes of allergies in children. 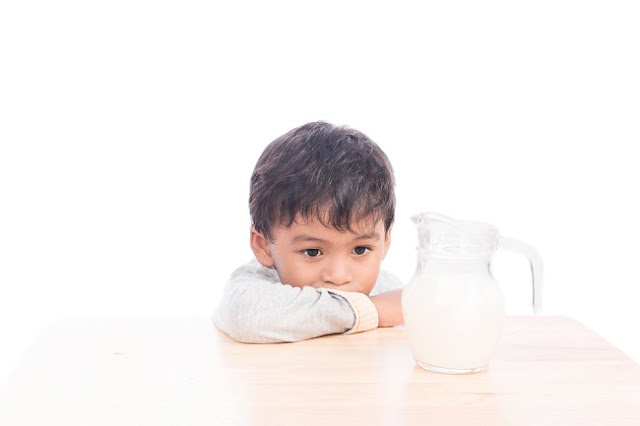 Milk is one of the complementary sources of nutrition for your little one. However, the Little One is not necessarily compatible with ordinary cow's milk. This can be known if the child shows symptoms of allergies after drinking milk.

Milk allergy is a condition in which the body's immune system (antibodies) that are supposed to attack infections that enter the body instead attack the proteins in milk. This happens because antibodies think milk protein can harm the body, so they react to fight it.
Milk protein consists of casein and whey. Your little one can be allergic to one of the proteins or even both. However, the type of milk protein that most often causes allergies is beta-casein protein A1 (A1 protein).
A milk allergy reaction will cause the release of histamine which can cause symptoms such as:
Swelling of the lips or tongue.
Milk allergy reactions in every child can be different, but the most to watch out for is a severe allergic reaction called anaphylaxis (anaphylactic shock). Anaphylactic shock starts with mild symptoms and then gets worse. Children who experience anaphylactic shock will feel short of breath, weak, and even faint. If not treated promptly, anaphylactic shock can be life threatening.
If your little one shows allergy symptoms after drinking milk, stop giving milk and immediately consult a pediatrician.

The Right Milk for Little Ones with Allergies

Until now, there is no treatment for milk allergy. However, allergy symptoms can be prevented by avoiding foods or drinks that contain milk. This includes yogurt, butter, cheese, and ice cream. Also avoid dairy products that come from other animals, such as goat's milk or sheep's milk. The protein in milk is similar to the protein in cow's milk.
If your child is allergic to cow's milk, or rather allergic to the A1 protein in milk, it doesn't mean he can't drink milk at all. Mothers can give your little one plant-based milk, such as soy milk, almond milk, hazelnut milk, and cashew milk. Plant-based milk is more convenient for consumption by people with lactose intolerance or milk allergies, because it is lactose free, cholesterol free, and low in calories. Give your little one fortified vegetable milk (added with other nutrients), so that their nutritional needs are still met.
Another alternative is to give hypoallergenic formula milk. Hypoallergenic milk is fairly safe for people with milk allergies, because it is produced using enzymes to break down milk proteins, so it doesn't trigger an allergic reaction.
In addition, milk from A2 cows is now available which is specially formulated for children who are incompatible with ordinary cow's milk. A2 milk comes from special cows that produce milk with protein content that is less likely to cause allergic reactions.
Several studies show that milk from A2 cows is proven to be more comfortable to digest and less likely to trigger allergies, especially those related to digestive problems. Digestive disorders in the form of flatulence, abdominal pain, soft stool texture, and frequent bowel movements can subside after consuming milk from A2 cows.
A small percentage of children with milk allergies still experience digestive problems or allergy symptoms, even though they have consumed this type of milk. However, A2 cow's milk is still considered to be better than ordinary cow's milk, because it has a more comfortable effect on digestion.
If your little one is old enough, you can teach him to avoid foods and drinks that trigger allergies. However, if the little one is still small, the mother must be more selective in choosing food and drinks for her to consume. Be observant in reading food or beverage product packaging labels, before giving them to children.