Why is it not recommended to give bananas before 6 months of age?

Why is it not recommended to give bananas before 6 months of age?

Not a few parents believe that a baby who cries constantly is a sign that he is starving. As a result, babies are given food, such as bananas, even though they are not even 6 months old. In fact, it's not safe, you know! What are the dangers, anyway? 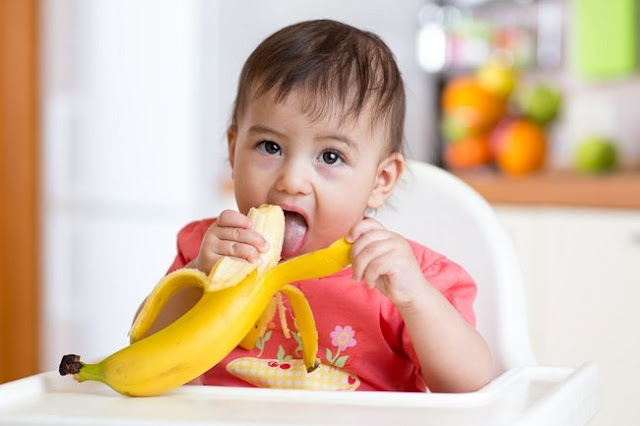 Bananas do contain nutrients needed by the body, including carbohydrates, fiber, potassium, vitamins B6 and C, and antioxidants. However, giving bananas as a complementary food to breast milk for infants under 6 months of age is not recommended, even though this fruit has a soft texture and is easy to chew.
This is the right time to give complementary foods to breast milk, especially bananas, to babies
From birth to 6 months of age, infants should only be given breast milk or formula, without other additional food and drinks. When a baby enters the age of 6 months, his nutritional needs increase so that breast milk or formula alone can not be sufficient.
Well, at this age babies usually just need additional nutrition and are ready to be given complementary foods, one of which is bananas. Generally, babies who are ready to eat solid foods or complementary foods will have signs, such as:

Dangers of giving complementary foods to breast milk too early, including bananas

In infants under 6 months of age, the previously described signs of readiness to eat have not appeared. Therefore, giving solid food at this age is still too early and is not recommended because it can have a dangerous impact on his health and even threaten his life.
Here are some dangers that you need to know if you give solid food to your baby too early:

Even though it has been softened into porridge, bananas and other foods, it is still solid food whose texture cannot resemble breast milk or formula milk, Bun.
Generally, babies under 6 months do not yet have the ability to swallow and chew well, so giving complementary foods at this age can actually harm them.
Any soft solid food is at risk of choking and clogging the baby's respiratory tract. If you don't get help right away, your baby can have difficulty breathing and threaten his life.
That's why in Indonesia there are many cases of giving bananas to babies under 6 months which lead to death.

Babies under the age of 6 months also do not have an optimal digestive tract, so giving complementary foods to breast milk, especially those rich in fiber such as bananas, can cause intussusception and blockage in the intestines. In addition, giving solid foods at this age can also cause diarrhea.

Excess or lack of nutrients and calories

For babies under the age of 6 months, breast milk already has the best composition as baby food. Even though they seem more filling, solid foods can't provide proper nutrition for babies.
Giving complementary foods to breast milk at this age can actually make the baby experience a lack or excess of calories and nutrients. For example, if you give bananas to your little one at the wrong time, he will be at risk of being overweight or obese, because this fruit contains quite a lot of sugar.

The introduction of complementary foods too early tends to discourage breastfeeding and formula milk, which are rich in iron and many other nutrients. This can cause the baby to be iron deficient.
In fact, iron has an important role in the formation of hemoglobin, which is a component of red blood cells that functions to transport oxygen throughout the body.
Without enough iron, the body cannot form hemoglobin optimally. As a result, tissues and organs of the body can experience a lack of oxygen and disrupted growth and development.
Babies who cry constantly are not necessarily hungry. He may cry because he is uncomfortable, tired, bored, sleepy, scared, sick, or his diaper is full. So, you don't need to immediately give him milk every time your little one cries, let alone bananas or other foods.
Remember, yes, Mother, giving solid foods such as bananas to calm babies under 6 months is not recommended because usually babies are not ready to accept them.
Signs that a baby is ready to eat complementary foods can indeed appear before the age of 6 months. Even so, Mother is still recommended to consult a doctor first if you want to give your little one food or bananas before the age of 6 months.