The benefits of chili can actually relieve stomach disorders

The benefits of chili can actually relieve stomach disorders

The spicy taste of chili is often blamed as the cause of stomach pain. But in fact, the benefits of chili are just the opposite. The content of chili can relieve stomach disorders. 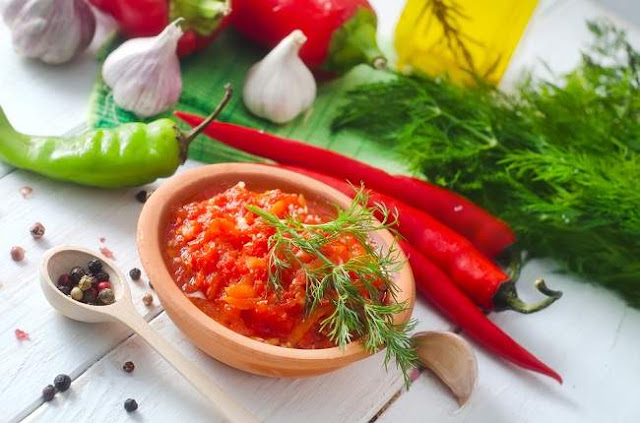 Chili consists of various types that are spread on various continents, including countries in Asia. This plant comes from mainland America which then spread to other areas as food and medicine. The spicy and hot taste when chilies are rubbed, licked or swallowed, is due to the capsaicin content.
In addition to capsaicin, the benefits of chili for health can also come from the compounds of capsanthin, violaxanthin, lutein, sinapinic acid, and ferulic acid contained in it. Capsanthin is a carotenoid in red chili which is an antioxidant to fight cancer. Violaxanthin is a carotenoid found in yellow chilies. While lutein is a compound commonly found in green chilies. This compound is associated with eye health. Sinapinic acid and ferulic acid in chili are also antioxidants to protect the body from various chronic diseases.

Benefits of Chili to Smooth the Digestive Tract

Chili can be consumed fresh or dried for preservation purposes. Dried chilies can be ground to serve in powder form. In addition, chili can also be roasted or burned until it turns black.
In contrast to the general view that accuses chili as the cause of stomach pain, the benefits of chili can actually be used to overcome various digestive disorders. Chili can be used to treat stomach discomfort (dyspepsia), heartburn, flatulence, and nausea. Spicy foods containing chilies are also seen to inhibit the growth of H. pylori bacteria which can cause ulcers on the stomach wall.
So far, people with peptic ulcers are asked to limit or avoid chilies. However, research has found that chilies are not always the cause of peptic ulcers. The capsaicin in chilies doesn't stimulate the formation of stomach acid, it actually prevents it. Capsaicin will stimulate alkaline conditions in the stomach, as well as improve blood circulation and increase the production of mucus that protects the stomach wall from damage. Capsaicin can also affect the gastric nerves that regulate pain stimuli.
But this good effect applies only to some people, especially those who have never had stomach ulcers. If you have previously experienced an ulcer in the stomach wall, and it gets worse when you eat spicy food containing chilies, then you should avoid consuming chilies.

In general, the nutritional content of red and green chilies is not much different. The benefits of chili from its nutritional content can be obtained from carbohydrates, fiber, protein, as well as vitamins and minerals such as vitamins A, B6, C, K, folate, magnesium, iron, copper, and potassium. In addition, chili is also low in calories.
In particular, the benefits of chili with vitamin C can help the absorption of iron by the body. Vitamin B6 has an important function in energy metabolism. Potassium is a mineral and electrolyte that is useful for reducing the risk of heart disease. The copper mineral in chilies is an antioxidant and is important for healthy bones and nerve cells. While beta-carotene contained in chili will be converted into vitamin A in the body.
In addition, capsaicin in chili is also said to be able to help lose weight, because it can suppress appetite while increasing the body's metabolism. This spicy flavoring substance in chilies can also increase body temperature so that it burns more calories when consuming chilies.
Several studies have also shown that those who are accustomed to eating spicy foods containing chilies, have a lower risk of developing heart disease and atherosclerosis.
Do you want to feel the pleasure of chili dishes but are afraid to feel spicy? Don't worry, there is a trick you can do. Forget water, have milk alongside your meals. The fat in the milk will immediately neutralize the spicy taste in the mouth. Although the benefits of chili are not small, you should avoid consuming chilies in excess.