Mother, this is a list of the benefits of peppers for children's health

Mother, this is a list of the benefits of peppers for children's health

Peppers are often used in healthy food menus, both for adults and children. Thanks to its nutritional content, there are many benefits of paprika for children that you can get by giving this fruit regularly to your little one. 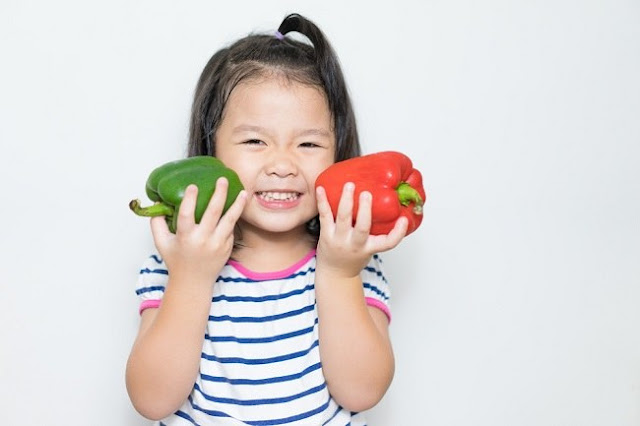 Peppers (Capsicum annuum) are divided into several types based on their color, namely red peppers, green peppers, orange peppers, and yellow peppers. Even so, the nutritional content between types of paprika is not much different and can provide benefits for children.

A series of benefits of peppers for children

Peppers contain carbohydrates, fiber, iron, calcium, magnesium, potassium, phosphorus, zinc, manganese, as well as vitamins A, C, E, and K. Fruits that are often mistaken for vegetables have a slightly spicy taste resembling chili peppers. However, paprika is still acceptable and safe for children to consume, really.
Thanks to its nutritional content, paprika has a variety of benefits for the health of the child's body, including:

Bell peppers contain vitamins A and E which are known to promote eye health. In addition, paprika also contains antioxidants lutein and zeaxanthin which play an important role in preventing retinal cell damage in children's eyes.

2. Protect yourself from free radicals

In addition to maintaining eye health, the antioxidant content in paprika plays an important role in counteracting free radicals, which are molecules that can damage body cells and increase the risk of various types of chronic diseases.
Antioxidants also have a role in maintaining and strengthening the body's immunity. So, by eating foods that contain antioxidants, such as bell peppers, your little one can be stronger in warding off bacteria or viruses that can cause disease.

Just like chili peppers, paprika also contains capsaicin, the active substance that causes a spicy and hot taste, although in lower levels. Capsaicin is useful for increasing metabolism, so the body is able to burn more calories and fat.
That is why, fruits that contain capsaicin, including bell peppers, are good for consumption by children who are overweight or obese. However, this must also be balanced with a healthy diet and regular exercise.

Generally, children really like to play outdoors and be exposed to the sun. Although the sun is good for healthy bones and skin, too often exposed to the hot sun can burn and harm a child's skin.
If your little one is often active outside the house during the day, you can reduce the bad effects of sunlight on your little one's skin by including peppers in his diet.
A study revealed that regular consumption of paprika can protect the skin from the dangers of the sun and reduce the risk of premature aging symptoms.
Those are the various benefits of paprika for children's health that can be obtained by consuming it regularly. Mothers can use paprika in a variety of food menus, such as scrambled eggs, omelets, fried rice, meat skewers, or pizza. Besides being healthy, this fruit also gives a unique taste to food.
Although rare, paprika can trigger allergic reactions, such as hives, skin rashes, nausea and vomiting, to shortness of breath. If this happens to your little one, check with the doctor to get treatment and make sure if your little one is allergic to peppers.