Know the Benefits and Risks of Consuming Kombucha Tea

Know the Benefits and Risks of Consuming Kombucha Tea

Kombucha tea may still sound foreign to Indonesian people. However, this fermented tea has become a byword for people abroad because it is considered to have many health benefits. 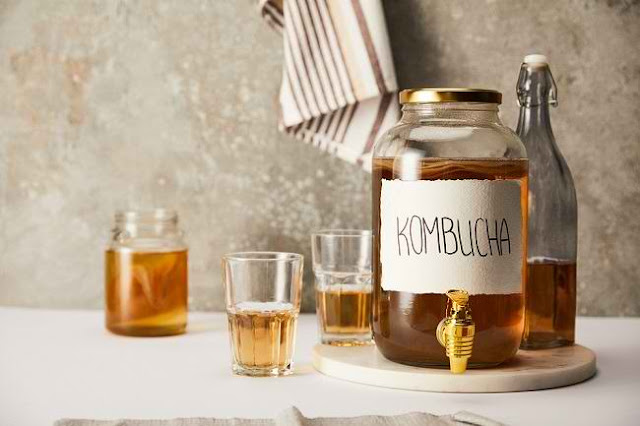 Kombucha tea has been consumed for nearly 2000 years in China. This tea is obtained by fermenting tea, yeast, and sugar for a week or more. During the process, acids, bacteria, and alcohol will form in the kombucha drink. This is what makes kombucha tea tangy, sour, and smells like vinegar.

The content of antioxidants and probiotics in kombucha tea drinks can strengthen the immune system, fight bad bacteria that cause infection, reduce inflammation, and improve digestive system health.
Research studies on animals also show that kombucha, which is rich in antioxidants and probiotics, is beneficial for helping the process of removing toxic substances from the liver. This effect is considered good for maintaining liver health.

Protects the body from cancer

Kombucha tea is thought to prevent the growth and spread of cancer cells. This is thanks to the polyphenol antioxidant content in it. However, the anticancer effect of kombucha tea as a cancer prevention so far still requires further research.

In research studies conducted on experimental animals, it is known that kombucha can slow down the digestion of carbohydrates in the body. This effect of kombucha is thought to reduce blood sugar levels, so it may be good for people with diabetes.

Reduce the risk of heart and kidney disease

Small research studies on laboratory animals have shown that kombucha can lower bad cholesterol (LDL) and increase good cholesterol (HDL). Along with its high antioxidant content, kombucha's effects are good for heart and kidney health.

Things to Note Before Consuming Kombucha

The popularity of kombucha tea makes some people interested in making this fermented tea at home. But actually, it is not recommended. Errors in the manufacturing process can cause kombucha tea to be contaminated with harmful bacteria that can cause poisoning.
Despite its fame, this kombucha drink also has some side effects, such as headaches and nausea, if taken too much. Some of these effects are thought to be due to the alcohol content in kombucha tea which is formed from a natural fermentation process.
In addition, this drink should also not be consumed by pregnant women, infants and children, alcoholics, people with liver disease, and people with weak immune systems.
Kombucha tea is believed to have many benefits and benefits for the health of the body, but some of these benefits have not been medically proven. Therefore, if you are interested in consuming kombucha tea to get the benefits, you should first consult with your doctor.