French Fries Are Unhealthy, Here's How To Outsmart It

French Fries Are Unhealthy, Here's How To Outsmart It

French fries are one of my favorite foods. However, high-calorie French fries make French fries fans have to be careful. There are several ways that can be done to suppress the negative effects of these french fries, especially by paying attention to how they are processed. 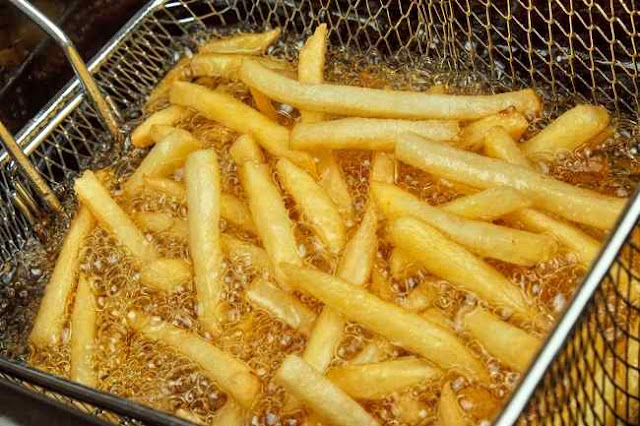 Potatoes do contain a variety of nutrients. However, French fries are recommended to be consumed in a limited way. In fact, a medium serving of French fries at a fast food restaurant generally contains 300-400 calories.

French Fries are High in Calories and Fat

French fries along with other fried foods are very tempting. Crispy on the outside and soft on the inside, so it can make people want to continue consuming it.
In a study revealed, French fries are a high-calorie food and are strongly associated with weight gain. In addition to being high in calories, a medium serving of French fries at a fast food restaurant contains about 300-500 milligrams of sodium or salt. So if you often eat french fries seasoned with salt, you may feel bloated afterward. High salt levels are believed to be the cause.
Meanwhile, french fries fried in vegetable oil mixed with hydrogen (hydrogenated oil) will produce trans fat content. This type of oil is widely used by restaurants with the aim that fried products will last longer.
Trans fats are very dangerous for the body. Consumption of this fat can increase levels of bad cholesterol, namely low density lipoprotein (LDL) and reduce levels of good cholesterol, namely high density lipoprotein (HDL). This can then increase the risk of heart disease.

It is important to change the way potatoes are processed

How to cook is one of the most important factors in determining the calories of potatoes to be cooked. Here are some ways to cook good potatoes:

In fact, it is better for you to bake potatoes than fry them. That's because roasting potatoes will provide more benefits by cutting calories and fat. This method can also prevent discomfort in the stomach due to stomach acid that can be triggered by oily and fatty foods. In addition, you can also "fry" the potatoes in the air fryer.

If French fries have been using oil that contains a lot of fat and calories, try replacing it with olive oil which is good for heart health. The trick, use two tablespoons of olive oil on the potatoes before baking.

If you want to cut calories even more, try baking potatoes without using any oil at all. However, you can replace it by spreading vegetable broth or beaten egg whites. Then, bake for a few minutes until they are lightly browned.

If you're making baked potatoes at home, you can also replace the salt with a variety of spices to enhance the flavor of the potato chips substitutes, such as using garlic, paprika, cumin, and others.
For those of you fans of french fries, changing the way you process potatoes can be done as a step to prevent the health risks that may arise. If necessary, consult a doctor or nutritionist to get a recipe or information that is right and safe in processing potatoes.