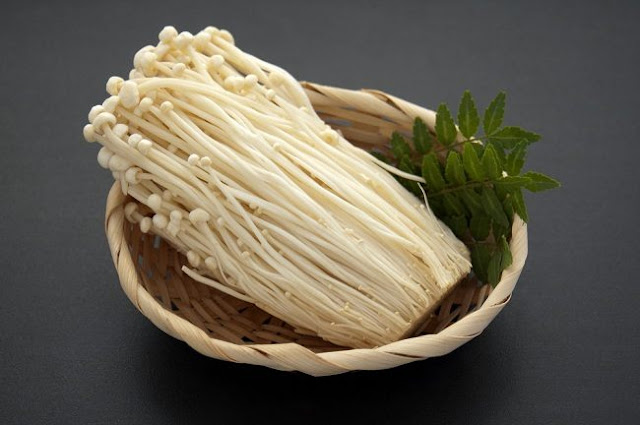 Enoki mushroom or enokitake is a type of edible mushroom or can be consumed. This mushroom is shaped like a stick with a hat or like a yellowish white bean sprout.
This mushroom from the Physalacriaceae family which has the Latin name Flammulina velutipes is one of four types of mushrooms that are widely cultivated in various countries, because of their delicious taste and high nutritional value. Besides being consumed as soup or other dishes, enoki mushrooms have even been used for medicinal purposes, especially in China since ancient times.

In 100 grams of raw enoki mushrooms, there are approximately water, energy, carbohydrates, protein, fiber, potassium (potassium), phosphorus, magnesium, niacin, selenium, folate, vitamin D, zinc, and iron. Enoki mushrooms also contain high antioxidants that can prevent the bad effects of free radicals. The antioxidant ergothioneine in this mushroom is thought to be able to protect body cells from damage caused by free radicals and UV radiation.
Enoki mushrooms are rich in polysaccharides that can be used as ingredients in health foods and cosmetic products. The amount of fiber in enoki mushrooms is thought to accelerate the breakdown of cholesterol, thereby reducing levels of triglycerides, total cholesterol, bad fats or LDL, and phospholipids in the liver. The mycosterol content in enoki mushrooms is also thought to have the ability to lower total and LDL cholesterol levels in the blood. This effect is good for preventing heart disease.
What's even worse, enoki mushrooms have anticancer substances called flammulin and proflamin which are seen to inhibit the growth of cancer cells, one of which is breast cancer. The anticancer effect of enoki mushrooms is also seen from its ability to boost the immune system against cancer cells.

Besides being rich in nutrients, enoki mushrooms are also delicious to eat. With a sweet and savory taste, it's no wonder that enoki mushrooms are the prima donna of cooking ingredients in Korea, Vietnam, Japan, and China. This mushroom is very versatile, and is usually processed as a side dish or main dish for vegetarians.
There are many ways to process it and combine it with other ingredients. Can be used as an ingredient for salads, processed by sautéing and roasting, or as an additional ingredient to make soup. If you want to try cooking enoki mushrooms, here's one recipe you can practice.

Materials:
How to make:

Materials:
How to make:
After knowing the various benefits of enoki mushrooms above, don't hesitate to start including them in your daily menu. If you have certain medical conditions, you should first consult a nutritionist before consuming enoki mushrooms.
When you want to eat enoki mushrooms, don't forget to wash and process enoki mushrooms until they are cooked so that they are safe for consumption. This is important to do, considering that there were several case reports related to listeria bacterial infection due to consumption of enoki mushrooms in the United States.