Don't Let Children Drink Too Much Milk, This is the Risk!

Don't Let Children Drink Too Much Milk, This is the Risk!

Consumption of milk is needed by the Little One to support his growth. However, giving milk must be in sufficient doses. Drinking too much milk can actually cause health problems in children. 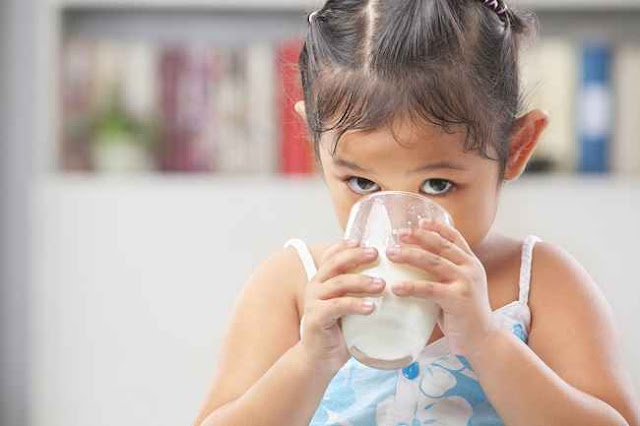 The benefits of milk are important as a source of calcium, protein, fat, and various vitamins for child growth and development. Even so, milk does not contain iron or fiber. It should also be noted, milk contains high calories, so the amount of intake needs to be considered.

Children aged 1-8 years need to drink at least 250 ml of milk per day and preferably no more than 500 ml per day or the equivalent of 2 small glasses. Drinking milk or its processed products (cheese, yogurt) in excess is at risk of causing health problems, such as:

Milk does not contain fiber, so consuming it in excess can trigger your little one to have difficulty defecating or constipation. In addition, children who drink too much milk will feel full and lazy to eat other nutritious foods, such as vegetables and fruits.
This behavior increases the likelihood of children being constipated. This condition is more common in children who drink more than 500-700 ml of milk per day. To maintain the health of your little one's digestive tract, at least choose milk that has been fortified with prebiotics.

Cow's milk formula is generally high in calories and fat, so if you consume too much, it can make your child overweight or obese. Especially if your little one likes to consume milk with added flavor and sugar or even sweetened condensed milk.

Not all children's milk has been fortified with iron. In fact, this mineral is needed for the distribution of oxygen throughout the body. If there is a lack of iron, your little one can look tired, lazy to eat, and often get sick.
When a child drinks too much milk, he is likely to be more lazy to eat because he is already full. This can make him deficient in the intake of foods that contain iron, so he is more at risk of developing anemia.

Tips to prevent children from drinking too much milk

Although it is not recommended to consume milk in excess, stopping milk intake for children cannot be a solution. However, your little one actually still needs nutrition from milk for growth and development.
To get around so that your little one does not experience negative impacts due to drinking too much milk, you can do the following tips:

Children aged 1-2 years do need to drink full cream milk because it requires a lot of fat intake. However, when the child has reached the age of 2-3 years and over, he can already be given low-fat milk, especially if the little one is overweight.

Mothers can try to reduce the frequency of drinking milk and fill the baby's milk bottle little by little. Also make it a habit for your little one to drink at least 2-5 glasses of water per day, Mom.

Children need a variety of nutrients in order to grow healthy. These nutrients include protein, carbohydrates, fat, fiber, and various vitamins and minerals, such as iron. Mother can serve meat, chicken, vegetables, and fruit as a menu for the Little One.
To increase your child's appetite, you can try to serve these nutritious foods in an interesting way. In addition, persuade your little one to eat before drinking milk. Because when you're full from drinking milk, your little one usually gets lazy to eat again, right?
It should be understood that the absorption of substances that are important during the growth period can be disrupted due to drinking too much milk. Therefore, mothers need to give milk to children in the right amount. If necessary, consult a pediatrician to get advice on the right nutritional intake for your little one.