Boiled or Steamed, Which is a Healthier Way of Cooking?

Boiled or Steamed, Which is a Healthier Way of Cooking?

Boiling and steaming is a way of processing food that is believed to be very healthy. But, between the two ways, which one is healthier? 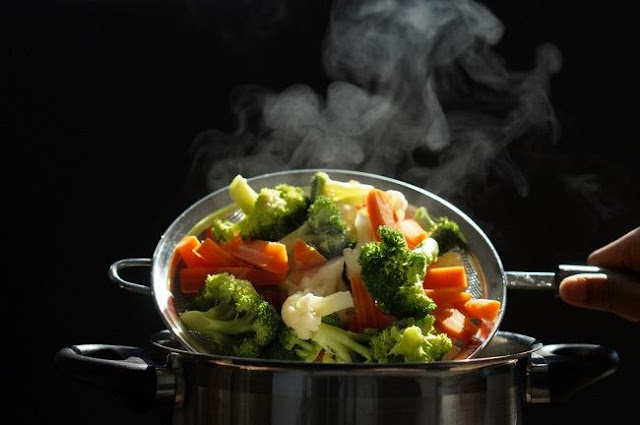 Boiling is a method of cooking by heating water or broth until it boils, then putting food into the water until it is cooked. While steaming is the process of cooking food using hot steam from boiling water. The trick is to heat water in an insulated pot, then put the food on the screen until it's cooked.

So, Boil or Steam?

You need to know that in addition to the type of food itself, how to cook or process food also greatly determines the nutritional content in it. If the cooking method is wrong, even healthy food can turn into a source of disease, you know.
Boiling and steaming is known as the healthiest way to cook food. Both of these cooking methods can maintain the calorie content of food because it does not require additional oil or butter. Then, between the two, which is the healthier cooking method?
Both boiled and steamed, just as healthy, really. However, some types of food are better if cooked by steaming. An example is vegetables.
For cooking vegetables, the boiled method is not the best way. This is because the nutrients in it, such as vitamins B and C, can also dissolve into the boiling water. So, so that you can still get the nutrients in vegetables optimally, cook them by steaming.
Even so, make sure that the steaming time is not too long, because cooking vegetables for too long can remove the nutrients in them, and change the color and taste of the vegetables.

So that all the food you cook remains nutritious, let's follow the cooking tips below:
Although boiled and steamed are good for health, both of these cooking techniques also have their drawbacks, namely making food taste bland. Once in a while, it's okay to cook with another method. However, make sure the type of food is healthy, yes!