Benefits of Soy Milk for Pregnant Women, Side Effects and Safe Limits for Consumption

Benefits of Soy Milk for Pregnant Women, Side Effects and Safe Limits for Consumption

The benefits of soy milk for pregnant women are not small. In addition to its delicious taste, soy milk has many nutrients that are good for the health of pregnant women and fetuses. However, if consumed in excess, soy milk can also cause side effects. 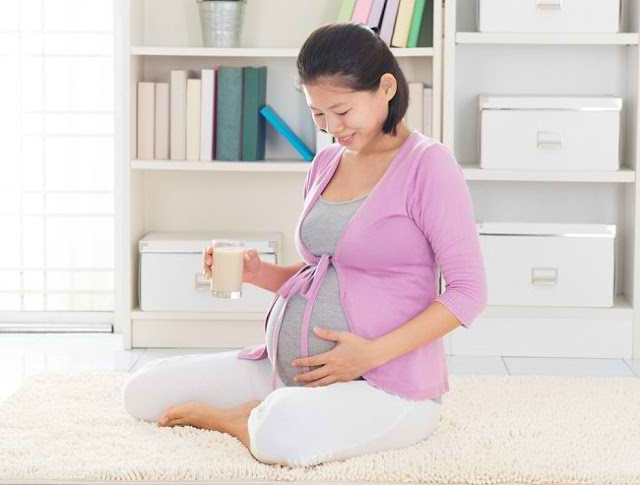 Soy milk is milk obtained from processed soybeans that have been boiled and ground, then mixed with water. In a glass of unsweetened soy milk, there are about 130–140 calories, 8 grams of carbohydrates, 4 grams of fat, and 7 grams of protein.
Soy milk also contains vitamin A, vitamin B12, folate, iron, zinc, and isoflavones. Most soy milk products have also been fortified with vitamin D and calcium.

Supports the formation of fetal tissues and organs

Protein is one of the important nutrients that the fetus needs in order to grow and develop healthily. Protein serves to support the formation of fetal tissues and organs, including the brain. Adequate protein intake during pregnancy can also reduce the risk of the fetus being born with low weight.
The protein content in soy milk is also useful for the development of the uterus and breasts of pregnant women, as well as a form of self-preparation for the process of childbirth and breastfeeding later.

The content of vitamin A in soy milk is important for the development of the eyes, skin, bones, and other organs in the fetus's body as well as forming the immune system. In addition, vitamin A is also useful for maintaining eye health and maintaining the immune system of pregnant women.
The intake of vitamin B12 obtained from soy milk is good for supporting the process of forming red blood cells in pregnant women and maintaining the health of maternal and fetal nervous tissue. Together with the isoflavone content in soy milk, vitamin B12 can also prevent neurological disorders in the fetus.
Vitamin B12 deficiency during pregnancy is known to increase the risk of pregnant women developing anemia, preeclampsia, and miscarriage.

Supports the development of the fetal nervous system

Folate contained in soy milk is a nutrient that is very useful for optimizing the development of the nervous system and brain of the fetus. Adequate folate and vitamin B12 needs during pregnancy have been shown to prevent birth defects in the baby's nerves, such as spina bifida.

Soy milk contains iron and levels can be higher in soy milk products that have been fortified with iron. Thanks to the iron content, soy milk is useful for forming red blood cells in the body of pregnant women and preventing anemia and reducing the risk of premature birth.

Soy milk contains calcium and vitamin D which are good for healthy bones and teeth. These two nutrients are the basic ingredients for the formation of bone and tooth tissue in the fetus.
In addition to some of the benefits above, there are several other benefits of soy milk for pregnant women, namely:

Although it has many benefits for pregnant women, soy milk can also cause side effects if consumed too much. Some of the side effects of soy milk are:

If consumed too much, soy milk can lower the natural cholesterol levels that the body actually needs during pregnancy. This cholesterol plays a role in the formation of vitamin D, as well as pregnancy hormones such as progesterone and estrogen.

Increases the risk of disorders of the fetal reproductive system

Isoflavones in soy milk have a chemical structure that resembles the hormone estrogen. Therefore, the isoflavones in soy milk are also known as phytoestrogens.
In pregnant women who have male fetuses, excessive intake of isoflavones is believed to increase the risk of the fetus experiencing abnormalities in the reproductive system or vital organs. Meanwhile, in female fetuses, excess isoflavone intake is thought to increase the risk of the fetus experiencing early puberty later.
However, some of the effects of soy milk above have only been known through the results of laboratory studies and small-scale studies. Until now, the impact and side effects of soy milk on the health of pregnant women and fetuses still need to be studied further.
Basically, soy milk is safe for consumption by pregnant women, as long as the portion is not excessive. The recommended amount of soy milk consumption for pregnant women is 1-2 glasses per day.
If the condition of the pregnant mother and the fetus is healthy, soy milk may be consumed as part of the daily menu. However, pregnant women may need to limit or should not consume soy milk if they have a history of certain diseases, such as thyroid disease and breast cancer.
In order to get the maximum benefits of soy milk for pregnant women, choose soy milk products fortified with vitamin D and calcium. If you are still unsure about consuming soy milk during pregnancy, pregnant women can consult a gynecologist.