Almond Milk, Healthy Alternative and Easy to Make at Home

Almond Milk, Healthy Alternative and Easy to Make at Home

Almond milk is now increasingly popular because it tastes delicious and is low in calories compared to cow's milk. 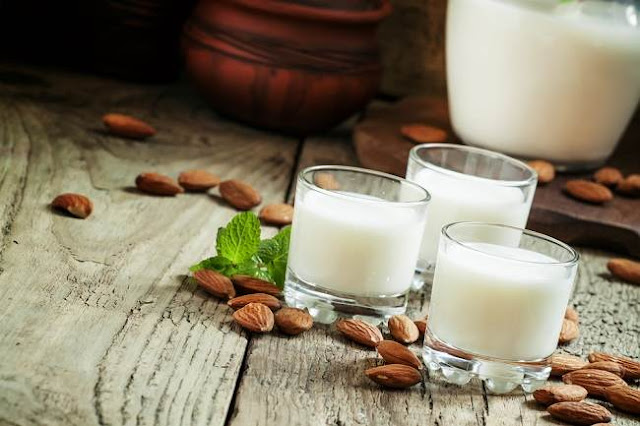 Commercially sold almond milk contains a variety of ingredients in it, including those with added sweeteners and flavours. In addition, some almond milk on the market is also given additional vitamins. However, actually almond milk can also be made at home.

Almond milk is recognizable by its creamy, creamy texture with a distinctive nutty flavour. The calorie content of whole almond milk is lower than other types of milk. Almond milk is also free of cholesterol and saturated fat, as well as a good source of vitamin A but low in vitamin D.
For people with cow's milk allergy, almond milk is an interesting alternative. Almond milk is perfect for those who are lactose intolerant because it does not contain lactose. This type of milk is also considered to be able to meet the milk needs of vegetarians who do not consume animal products.
However, almond milk can not be relied upon as a source of protein, unlike if consumed in the form of almonds. There is 1 gram of protein in every one cup of about 30 ml of almond milk. This amount is very low, compared to 8 grams of cow's milk protein per 30 ml.
That's why almond milk is low in protein, making it inappropriate as a substitute for breast milk, other growth milk, or formula to meet the needs of children under two years of age.
Most almond milk on the market today is provided with additional calcium and vitamin D to complement its nutritional content. In addition, pay attention to whether purchased almond milk contains carrageenan (milk thickening agent) which can trigger indigestion for some people.

How to Make Almond Milk

Almond milk on the market can be found in original flavors, vanilla and chocolate. There is also pure almond milk without added sweeteners and flavours.
Besides being consumed directly, almond milk can be used as a mixture of tea, coffee, or made into a smoothie with a mixture of fruits. Almond milk can also be used for cooking as a substitute for cow's milk and baking cakes.
To make almond milk at home, first prepare the necessary ingredients. Every 220 grams of raw almonds, mixed with 940 ml of water. Prepare the vanilla flavor, if you like.
Soak almonds for 8 to 12 hours. Once the beans are tender, drain them from the water.
Place the nuts, water and vanilla in a blender and blend until well combined. If the mixture seems too runny, reduce the amount of water. In addition to vanilla flavor, you can add additional sweeteners such as honey, sugar, or other sweeteners.
Strain the almond milk. It is recommended to use a filter cloth so that the remaining almonds do not enter the milk. The rest of the almonds are filtered, can be used for food mixtures after drying.
Ready-made almond milk can be consumed immediately or stored in the refrigerator for about 4 to 7 days.
Pay attention to the advantages and disadvantages of almond milk as an alternative to your nutritional boost. Adjust to the nutritional needs of you and your family.