4 Benefits of Pomegranate You Need to Know

4 Benefits of Pomegranate You Need to Know

Who doesn't know pomegranate? This fruit, which is identical to the red color and has a sweet taste, is a fruit that is loved by many people. In addition to its sweet taste, it turns out that pomegranate also has many benefits. To understand more about the benefits of pomegranate, see the following article. 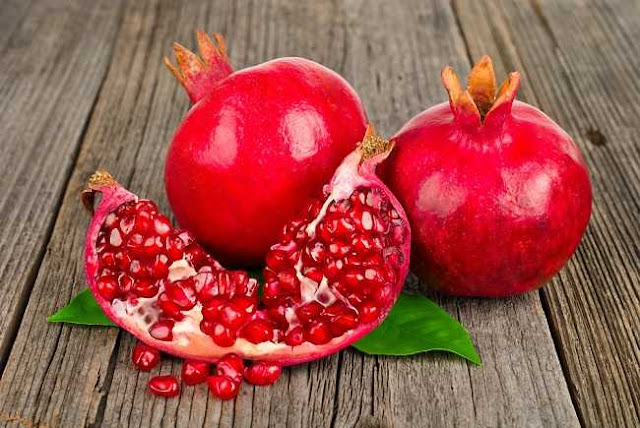 Pomegranate, which has the Latin name Punica granatum, is a type of fruit that belongs to the berry group. This fruit, which has a diameter of about 5-12 cm and is shaped like a fig, contains various nutrients, such as protein, carbohydrates, fiber, and vitamins needed by the body, including vitamin C, vitamin B complex, folate, vitamin E, and vitamin K. .
Pomegranates also contain various minerals, namely potassium, magnesium, zinc, and copper, and are rich in polyphenol and anthocyanin antioxidants. Not only that, pomegranate is also low in calories and fat, making it possible to be consumed every day.

The following are some of the benefits of pomegranate that can make you more interested in consuming it:

If you have a risk of coronary heart disease, try to consume pomegranate juice. A study showed that consuming at least 200 ml of pomegranate juice every day for 3 months, can reduce the symptoms of ischemia due to constriction of heart blood vessels. can keep the blood flow of the heart and blood vessels throughout the body remain smooth.

Besides being believed to prevent the emergence of heart disease, it turns out that pomegranate juice is also believed to inhibit the growth of cancer, especially prostate cancer, skin cancer, breast cancer, and lung cancer. If taken regularly and accompanied by a balanced diet. This is because pomegranates contain antioxidants that are not only useful for fighting free radicals, but also can repair and prevent DNA damage that can trigger the emergence of cancer cells. It is not impossible that pomegranate juice will have a good impact on health, especially in inhibiting the growth of cancer cells.

Reducing the risk of arthritis

If you have arthritis, there's no harm in trying to eat pomegranate. Pomegranate which has anti-inflammatory properties, is believed to be able to overcome inflammation in the joints. A study even revealed that pomegranate extract contains compounds that can fight joint damage in people suffering from osteoarthritis. However, this assumption is still limited to animal studies and requires further study.
How, have fallen in love with the benefits of pomegranate? Although these benefits still require further research, of course it is also not wrong to eat foods rich in nutrients, such as pomegranates. Include pomegranate in your daily diet, and feel the benefits it provides.